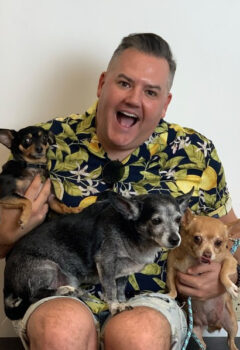 See what Ross Mathews is up to:

“I love my adopted dogs Selena, Audrey, and Pa Earl so much – they’re a wonderful reminder that ‘perfect’ comes in all shapes, sizes, and abilities. Pet adoption is the way to go and on Remember Me Thursday®, please tell the world you think so, too!”

Ross Mathews is a television personality who got his start as a correspondent for The Tonight Show with Jay Leno. He is a Series-judge on the Emmy Award Winning RuPaul’s Drag Race and was voted “America’s Favorite Houseguest” on the inaugural season of Celebrity Big Brother.  In addition to his work on television, Ross can be heard weekly on his top-rated podcast Straight Talk with Ross Mathews and is a best-selling author of the autobiographical Man Up!. Ross loves to spoil his paw-fect puppies…   Selena, Audrey, and Pa Earl!