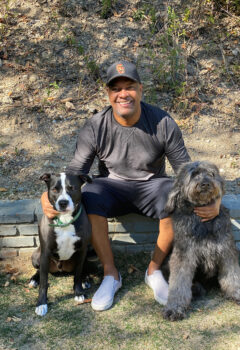 See what Rodney Peete is up to:

“Pets give you unconditional love. I think it’s more intense with a rescue.  Animals know and they understand instinctively when you’ve saved them from a situation or brought them into a loving environment. They know, and they give you that love back. By supporting Remember Me Thursday®, pet lovers are increasing awareness of the importance of rescuing pets.”

Rodney Peete is a former football quarterback who played in the National Football League (NFL) for 16 years. He retired from playing in 2004 and is now in broadcasting. After his retirement from the NFL, Peete became one of the hosts of the Fox Sports Networks sports talk show The Best Damn Sports Show Period, was featured in the docuseries For Peete’s Sake on the Oprah Winfrey Network, and in co-hosted both the Kitten Bowl and the American Rescue Dog Show for the Hallmark Channel in 2019. Along with his wife Holly, he is co-founder of the HollyRod Foundation, a 501(c)(3) organization established to generate funds to fight Parkinson’s disease, children suffering from autism and improve the quality of life for those in need. The Peetes share their home with their sons and two dogs named Mako and Freddie.