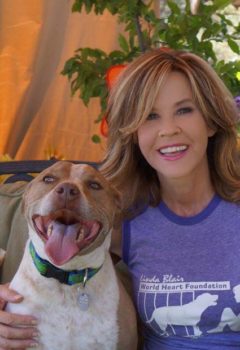 See what Linda Blair is up to:

“Remember Me Thursday® is a day to honor all of the orphan pets who never found a loving home and call attention to the animals still hoping to be adopted.  It’s a day when animal lovers and rescue organizations join together as one unified voice. A voice that knows that only by joining together we can make a difference for orphan pets. Be a part of the change… help increase awareness of homeless pets on Remember Me Thursday® and every day.”

Linda Blair is an actress and animal rights activist. Linda is best known for her role in the film The Exorcist, for which she was nominated for an Academy Award and won a Golden Globe and television films and horror films, various independent films, as well as several television credits  (Scariest Places on Earth and Animal Planet’s Pit Boss). In addition to her acting credits, Linda has publicly supported various charitable causes, specifically animal rights. In 2004, she founded the Linda Blair WorldHeart Foundation, which serves to rehabilitate and adopt rescue animals. In addition to all the homeless animals she rescues, she shares her heart with her own pets, Suzie and Johnny (pictured).