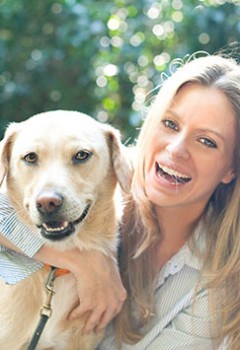 See what Kristin Bauer is up to:

“Remember Me Thursday® is easy for me as that is every day for us. I can never forget the millions of healthy beautiful animals in shelters because I have four in my house who are perfect. I know there are still so many waiting for a human to love them. There are enough homes if we adopt and don’t buy animals. My four rescues really are my best friends.”

Kristin Bauer is an American film and television actress, perhaps best known for her role as vampire Pam in the HBO series True Blood, as Jerry’s girlfriend Gillian or “Man-Hands” on Seinfeld, and as sorceress Maleficent in the ABC series Once Upon a Time. An animal advocate, she has produced Red Dot, a documentary about the plight of endangered elephants and rhinos in Kenya, and shares her home with her husband Abri, rescue dogs Hobie and Sydney, and sweet cats Abigail, Jasper, Samuel, and Loshe.