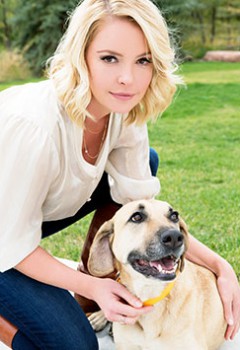 See what Katherine Heigl is up to:

“Every day in America, 10,000 pets are killed for lack of a good home. It is important to not forget those animals who have been euthanized in our shelters across America and to focus on those still waiting for a home. Remember Me Thursday® is our opportunity to bring to light these homeless pets.”

Katherine Heigl is an Emmy Award winner and two-time Golden Globe-nominated actress, as well as a producer. She is best known for her starring roles in the feature films “The Ugly Truth,” “27 Dresses” and “Knocked Up,” as well as her work on ABC’s critically acclaimed drama “Grey’s Anatomy.”  For her performance as Dr. Isobel “Izzie” Stevens on the series, she won an Emmy and earned two Golden Globe nominations for Best Actress in a Drama Series. Katherine recently appeared in the hit-series “Suits” for USA.  She can be seen next starring in the upcoming “Firefly Lane” for Netflix, a new series based on the best-selling book, which she is also producing.

Among her charitable endeavors, Katherine co-founded the “Jason Debus Heigl Foundation” with Nancy Heigl, an organization dedicated to animal welfare. In addition to being a dedicated mother to three young children, she is a loving pet guardian to 8 dogs, 4 cats, 9 horses, 2 miniature horses, 2 donkeys, 2 pygmy goats and 9 chickens.