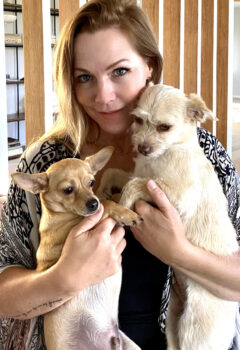 See what Jennie Garth is up to:

“Pets make me smile. Whether it is the wag of a tail, their soulful eyes, or their unconditional love, they know how to spread joy. On Remember Me Thursday™, join me in spreading the joy (and smiles!) that pet adoption can bring!”

Jennie Garth is an actress known for starring as Kelly Taylor throughout the Beverly Hills, 90210 franchise (1990–2000) and Val Tyler on the sitcom What I Like About You (2002–2006). In 2019, she co-created the Fox meta series BH90210 with Tori Spelling, her former Beverly Hills 90210 co-star. She was also a celebrity judge on the Hallmark Channel’s American Rescue Dog Show. She has starred in several movies made for TV, a number of which she has produced herself. Jennie shares her life with her family and their dogs Pinky, Sandy, Pearl, Buddy, and Fauci (named after Dr. Fauci) who Jennie’s family began fostering during the covid-19 quarantine and is now a beloved member of the family!