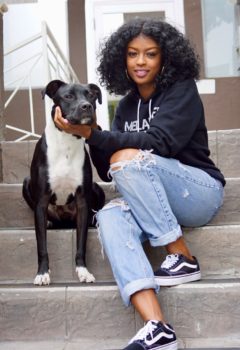 See what Javicia Leslie is up to:

“I didn’t choose Judah, he chose me, and I’m thankful he did!  For me, adoption was the only way to go! There are so many fur babies in need of a forever home, and so many homes in need of a forever love. I’m so thankful to the Helen Woodward Animal Center for connecting me with my fur baby and filling my heart with so much love. On Remember Me Thursday®, fill your heart with love by adopting a pet or encouraging a friend to do so! ”

As recently featured in Women’s Health and Emmy Magazine, exceptionally driven, stunningly beautiful and charismatic, Javicia Leslie, is best known for her breakout series regular role on CBS’ #1 drama, “God Friended Me” (returning Sunday, September 29th @ 8:30pm) as the quick witted and level headed lesbian daughter of ‘Reverend Finer’ (Scandal’s Emmy-nominated Joe Morton). Recently, Javicia is also known for stealing the screen on Carl Weber’s “The Family Business” (BET). Returning to the screen this Fall, Javicia tackles the lead role in hilarious new comedy, ALWAYS A BRIDESMAID, penned by Yvette Nicole Brown, currently hitting the festival circuit ahead of a BET and theatrical release this September. As driven philanthropically as she is in her career, she has started an annual charity drive timed around her birthday to use the evening to give back to youth in her community, this year collecting donations of sports items via her charity, The Chandler Foundation. Splitting her time between Los Angeles and New York City, when Javicia isn’t filming, she spends her free time planning her next charity event, spending time with her dog, Judah, and staying fit through her passion for fitness and vegan diet.