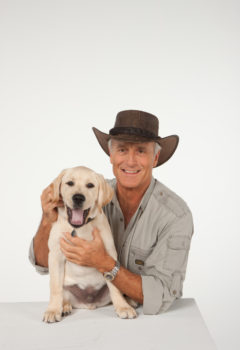 Photo by The Petco Foundation

See what Jack Hanna is up to:

“Some of my best childhood memories involve our family pets. They taught me about love, compassion and responsibility. Animals have given me so much – there’s nothing better than returning the favor and adopting a cat or dog from your local animal shelter and supporting Remember Me Thursday®!”

Animal expert Jungle Jack Hanna’s hands-on approach has won him widespread acclaim as Director Emeritus of the Columbus Zoo and Aquarium and The Wilds, conservationist, author, television personality, and lifelong adventurer. Recognized around the country as America’s favorite zookeeper, Jack has made countless television appearances since 1983 on shows such as Good Morning America, The Late Show with David Letterman, Larry King Live, The Late Late Show with James Corden, The View, and Fox News and CNN news programs. He is the host of TV’s Emmy award winning Jack Hanna’s Into the Wild and Jack Hanna’s Wild Countdown. Jack and his wife, Suzi, recently welcomed a puppy, Brass, into their home and are excited for the years of walks and treats yet to come.