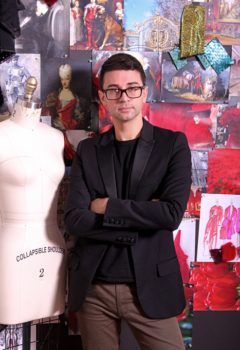 See what Christian Siriano is up to:

“My dogs Topper and Bear are a constant source of love in our home. I hope that on Remember Me Thursday® people will remember there are many adoptable pets just waiting for a chance to be loved too.”

In 2012, the first flagship Christian Siriano store opened in New York City and his latest retail venture, “The Curated NYC”, is located in the heart of midtown and steps from 5th Avenue and Central Park. In 2013, he was inducted as a member of the Council of Fashion Designers of America (CFDA). Dubbed “the new king of old-school glamour” by Elle, his designs have appeared in countless editorials and have been worn by the world’s leading ladies and remain a red carpet favorite. He released a photographic retrospective with Rizzoli Books in late 2017, titled Dresses to Dream About, which has now gone into its second printing.  In April 2018, Christian was named among Time’s 100 Most Influential People in the World for being a pioneer in body positivity and runway diversity in the fashion industry. He celebrated the 10 year anniversary of his brand last year with a milestone show consisting of a jaw-dropping 72 looks. In 2019, Christian dressed 17 women at The Academy Awards and nine at The Emmy’s and is fresh off of a historic moment at this year’s Academy Awards where Billy Porter wore a gown of his on the red carpet as well as his scene-stealing Janelle Monae look at The Met Gala.  He returned to Bravo’s Project Runway in the role of mentor in early 2019.  Having traveled the world over, Christian loves to return home to his two dogs, Topper and Bear, who remain his most prized possessions.