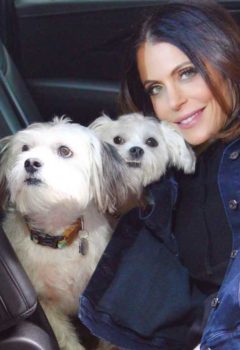 See what Bethenny Frankel is up to:

“Many pets are waiting to be adopted in shelters. On this Remember Me Thursday®, please join me in being their voice. As 2019’s Official Spokesperson, I ask you to join me on social media on September 26th and tell the world that pet adoption is the way to go!”

Bethenny Frankel is a self-made businesswoman, TV producer, philanthropist, multiple New York Times bestselling author, and mother. She is the Founder & CEO of Skinnygirl, a lifestyle brand offering practical solutions to women, including the recent launch of the Skinnygirl Jeanswear Collection, which sold out on HSN within its first few hours. Coming to HBO Max, Bethenny is set to headline a new business competition series, The Big Shot with Bethenny, from MGM Television, Mark Burnett and her own B Real Productions. She can be seen as a guest shark on ABC’s critically acclaimed series “Shark Tank” and has also been named one of the Top 100 Most Powerful Celebrities by Forbes. Not fulfilled by business alone, Bethenny established the worldwide initiative, “B Strong.”  In partnership with Global Empowerment Mission, the initiative provides people with much needed gift cards, bank cards and critical supplies so they are able to deliver aid in real time. B Strong has supported immediate aid programs worldwide, including Puerto Rico, Guatemala, the Bahamas, Australia and more. Most recently, Bethenny worked on getting PPE to hospitals and medical workers on the front lines of the COVID-19 pandemic.  Bethenny shares her home with her rescued dogs Biggie and Smallz who bring joy and laughter to her life on a daily basis.