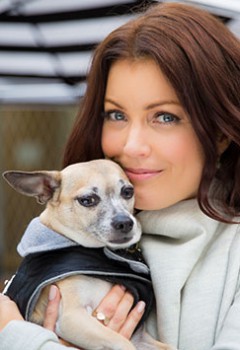 See what Bellamy Young is up to:

“On Remember Me Thursday®, join animal lovers across the globe and speak up for homeless pets. Many amazing animals end up at shelters and rescues through no fault of their own. They are full of unconditional love and are simply in need of a forever family to share it with. If you are ready for a new friend, please adopt your next pet…. tell the shelter that Bean, Sadie, Max, and Button sent you!“

Bellamy Young is an actress, singer and producer, best known for her role as President and Former First Lady of the United States, Melody “Mellie” Grant, in the ABC drama series Scandal. In 2014, for her portrayal of Mellie, Bellamy won the Critics Choice Television Award for Best Supporting Actress in a Drama Series.  A pet adoption advocate, Bellamy shares her home with cats Sadie, Button, and Max as well as her rescue dog, Bean.