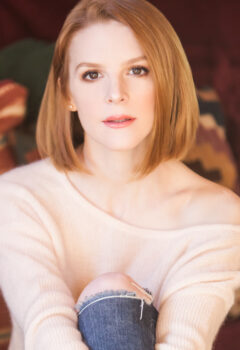 See what Ashley Bell is up to:

“Remember Me Thursday® is a day to honor all of the pets who never found a loving home and call attention to the animals still hoping to be adopted.  It’s a day when animal lovers and rescue organizations join together as one unified voice. A voice that knows that it is only by joining together that we can make a difference for shelter pets. Be a part of the change… help increase awareness of homeless pets on Remember Me Thursday® and each and every day.”

An actress across film, television and theater, Ashley Bell is most recognizable for her critically acclaimed role in “The Last Exorcism,” for which she earned an Independent Spirit Award and MTV Movie Award nomination. In 2014, Bell made her Broadway debut in “Machinal,” and has since starred in films that have garnered acclaim at Sundance, SXSW, Tribeca and TIFF.

Bell directed, wrote and produced the critically acclaimed feature documentary “Love & Bananas: An Elephant Story,” which depicts the rescue of a blind Asian elephant from captivity in Thailand and her journey 500 miles to freedom. Love & Bananas was qualified to be in consideration for a 91st documentary Academy Award, won the Genesis award for Best Feature Documentary and Ashley was awarded the Women and Green Economy Leadership Award from Earth Day Network. She wrote a companion ebook entitled “Shoot It. Sell It. Show It. How I Made An Independent Film with Grit And Google.”Additionally, Bell serves as a US Ambassador for Cruelty Free International.

Currently, Bell is Executive Producing a global docu-series entitled, Elephant Chronicles and is adapting a play by Pulitzer Prize nominee Lillian Groag into a limited series. Born and raised in Los Angeles, Bell studied acting and directing at Cambridge University (UK). She graduated from NYU’s Tisch School of the Arts with honors, and was mentored by Oscar nominee Kathleen Turner.