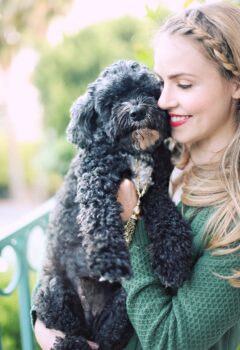 See what Amanda Schull is up to:

” Our pets support and love us unconditionally because they see the best in us. They reflect everything that is good in this world and give us a companionship that is uninhibited and pure. Rupert has been my best friend for more than 17 years. He has been my support system through more formative events than anyone else. On Remember Me Thursday™, I encourage others to adopt a best friend who can provide a love as fulfilling as I have been lucky enough to experience with Ru.”

Amanda Schull was born and raised in Honolulu, Hawaii. She was never discouraged from bringing home a stray or abandoned animal, no matter how exotic her finds may have been. Schull made her motion picture debut in the starring role of aspiring dancer Jody Sawyer in the Sony Pictures cult classic film CENTER STAGE. Following CENTER STAGE, Schull returned to the San Francisco Ballet, where she was a member of the company for seven seasons.  She was most recently seen starring in USA’s hit drama SUITS as attorney Katrina Bennett. Previously, she starred in the SYFY series 12 MONKEYS based on the film of the same name. Schull is also known for recurring roles in fan favorite TV series ONE TREE HILL and PRETTY LITTLE LIARS.  Schull currently lives in Los Angeles with her husband, son, and 17 year old cockapoo, Rupert.