Since its inception, Remember Me Thursday® has touched over 1.5 billion people across the world by advocating for pet adoption. Rescue pets have a profound impact on our lives and to remember them, we launched our annual Remember Me Thursday® contest to give back to the organizations who perform life-saving work!

Here are the winners from the contest submissions we received this year: 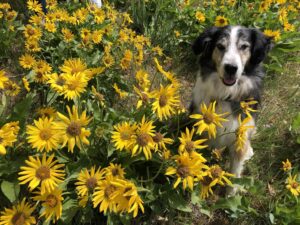 His body was a tight ball huddled in the corner of his kennel surrounded by the cacophony of the shelter, scars on his face, head down, left eye sagging. Abandoned with his littermates and mother, in the wilds of Oregon ranch country, shot at by ranchers, fighting to survive every day for years.

His name came from the quills jutting painfully from his face, throat and left eye when rescued.  Quill was mostly blind, timid, scared, and had no idea how to interact with people.

“You want to do what?!” exclaimed my family.  The shelter told me, “You have to understand, this will never be a ‘sleep at your feet’ kind of dog.”

In those early times, you could not walk behind him, or approach from his blind side, and he bolted at sounds, like as if they were a gunshot.  I sat with him at night as he snarled and cried from nightmares of his past horrors trying to survive.

Fast forward five years, because this kind of rescue story takes that long, and meet the sweetest and loving of half-blind “wild” dogs. If you want to find me, look for Quill, my shadow, my best friend. His friendship helped our family through the COVID pandemic, a wildfire, and a robbery. He brings sunshine and magic into our lives with his little kisses, big smile as he rushes to greet us, tail thumping. He loves fluffy beds, asks to be brushed, and goes to bed early.

He does not fetch, still won’t get in a car or walk on a leash, but, contrary to past predictions, he is sleeping at my feet as I write this.  My sweet, wild doggie. 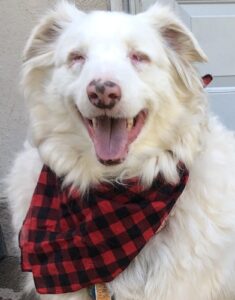 Raina was born blind and deaf, but not mute. I adopted Raina when she was six months old. Raina can’t see or hear. But Raina likes to be seen and heard. She’s a fluffy girl who always has a smile on her face. She loves treats, stuffed animals, and naps. I trained Raina using touch commands. Raina and I attended dog numerous rescue dog events raising much needed funds and educating the public on special needs dogs. With Raina’s help, I also started fostering and adopting out other dogs with special needs. Raina is brave and fearless. She loves swimming in the ocean & hiking mountains. Raina has worked alongside me as a model or acting on TV sets. Everywhere that Raina goes, she shows people that disability means possibility.

As a music teacher, I created the three-time award winning Lending a Paw program combining music with community service. My music students performed fundraising concerts for local shelters. Then I started to get very sick and I was hospitalized. I was eventually put on months of bedrest and a 2-year medical leave of absence from teaching music. I don’t know what I would have done without Raina by my side. 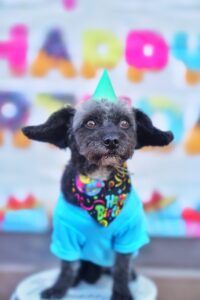 When I was at the brink of becoming disabled after being diagnosed with Complex Regional Pain Syndrome, my doctor suggested getting a service dog. The problem with that was that I was scared of dogs! In preparation for a dog in my near future, I decided to go to a nearby rescue to “look at dogs in cages” and try to desensitize myself. When I set my eyes on the first dog there, my heart melted as he gave me his best brown puppy eyes with his little face in a cone.

“He has high heartworm, has injuries from a dog bite, and is afraid of other dogs”, they said as he trembled each time another dog barked. I thought to myself, “Defective and neurotic, just like me? This is a match made in heaven!” I held a dog, darling Koda, for the very first time that morning, for the first time with no fear in my heart. That morning, I brought Koda home and it changed my life forever!

Koda and I have been best friends since November 22, 2014. Koda is the healthiest he has ever been and I am no longer suffering in pain. So, I beg to question: Who rescued who?