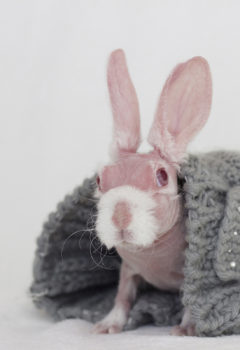 See what Mr Bigglesworth is up to:

“Mr Bigglesworth’s message is ‘Be your own kind of beautiful’ he promotes love, acceptance and inspiration for every animal and human being. He helps Rabbit Rescues around the world and encourages the adoption of pets and helping those less fortunate. Please take a moment on Remember Me Thursday® to remember all the animals that are sitting in shelters waiting for a friend of their own.“

In July of 2017, Mr Bigglesworth was seen on a Facebook photo with his siblings and a message underneath the post, “hairless one not for sale”. Cassandra contacted the breeder about the hairless rabbit and he told her she could have him for “Free,” as he had put the last one down, as it wasn’t “saleable”. At only 6 weeks old, he was rescued and it was clear that he would require special care. Cassandra found out that he has a very rare gene disorder and they don’t usually live past 6 weeks of age but he is now 2 years of age. Mr Bigglesworth’s story has gone global and he has shown the world that differences need to be embraced, not shunned. Cassandra receives countless comments and messages daily about the impact that Mr. Bigglesworth is making on individuals lives. Mr Bigglesworth is bringing smiles and happiness to thousands of people. He donates a % of profits to animal rescues from the sales of his merchandise www.mrbigglesworththebunny.com . He loves his girlfriend Miss Cinnamon Bun and his newly adopted friend “Miss Paris” the whippet.