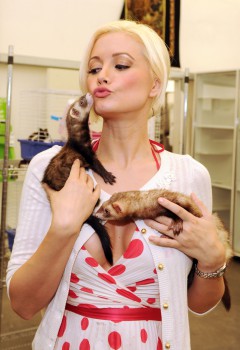 See what Holly Madison is up to:

“It’s so important to find homes for all the animals in need and every adoption helps! I treasure my dogs and ferrets, all of whom I found at my local shelter – they have brought so much love into my life. On Remember Me Thursday®, and every chance you get, I hope you share with others how amazing and unique your adopted pet is!”

Holly Madison is a New York Times best-selling author and her book Down The Rabbit Hole catapulted to the top of seller lists when it debuted earlier this year.  Madison spent five seasons on the top-rated E! hit reality show The Girls Next Door before landing the leading role in the Las Vegas Strip smash hit Peepshow. She also starred in two seasons of her own E! hit series Holly’s World. Madison, her husband, children, and their adopted pets, divide their time between Las Vegas and Los Angeles.