Meet the winning pets and nominated organizations from our #RememberMeThursday contest!

We received 8,213 entries for the contest, and we couldn’t be more grateful for all the rescue pet parents who submitted their rescue pet photos and moving stories. Thank you all for advocating for pet adoption and orphan pets.

Special thanks to Blue Buffalo and Kong for supporting the prize-winners’ monetary donation, 1000 pounds of food, and 100 pet toys! 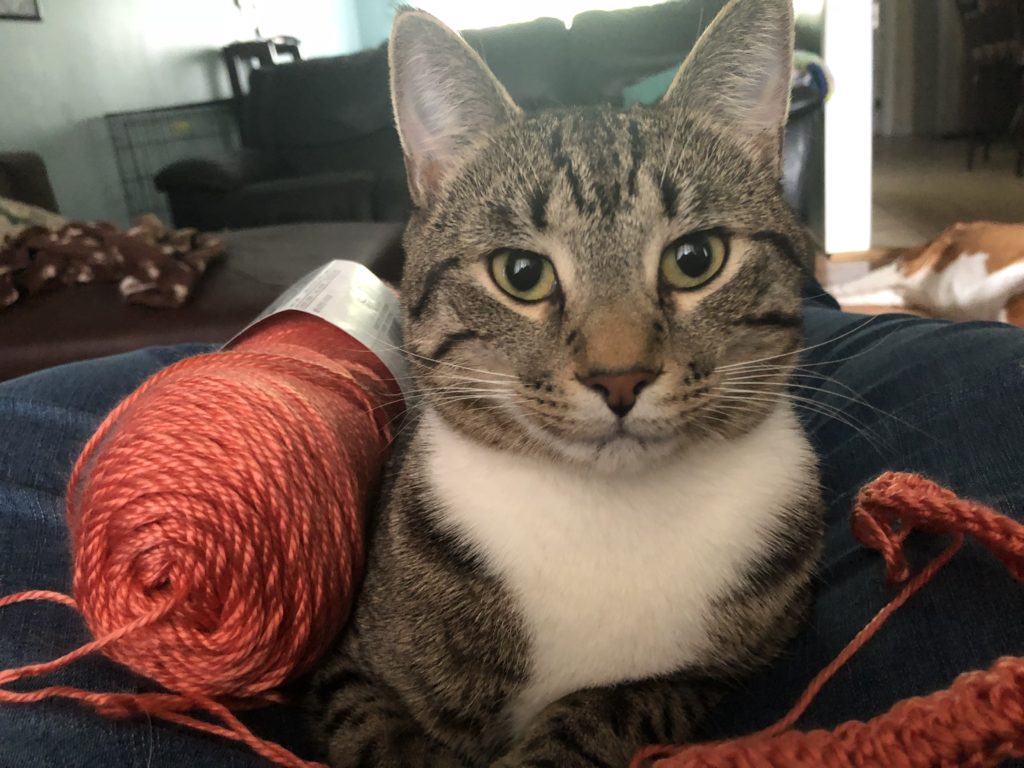 “When I went to volunteer that day, I had no intentions to leave with a cat. Look, yes. Consider, yes. But not actually bring anyone home that day. We had recently lost our senior American Bulldog to an unexpected and typically non-fatal illness, and we were heartbroken. We had also recently packed up our daughter and her emotional support cat as they returned to college. Our remaining crew of two dogs, my daughter, my husband and me were a little lost. The shelter was pretty much at capacity, so there were LOTS of animals, every shape, color, size, age, and temperament. I had looked at dogs, realizing none were the right fit for us at the time and I had spent time with each of the adoptable cats, except for the last cubby in the last room. Inside was an adolescent cat that per his info was the last remaining cat from a large litter.

We were not in the market for a kitten, but this 6 month old tabby came out and tucked himself into my arms immediately, his little purr vibrating thru my chest and his little paws kneading my arm. All I could think of, was the movie “Lilo and Stitch” and the line, “He is good. I can tell”. So later that evening, after meeting our crew, Stitch came home to his very own “Ohana”. We did not know what amazing adventure we had signed up for. The laughter returned, and he was not only affectionate with the people in our family but the dogs. Our female dog was in mourning. Every day she would seek out her lost boyfriend’s special spot, and lie down and cry. Although it was lessening, she would do this every day ritualistically. But then this kitten came home, and he fascinated her. He did things she couldn’t quite figure out, and played with her tail. I can’t say they are the best of friends, but I have no doubt, it was his love and presence that helped her broken heart. 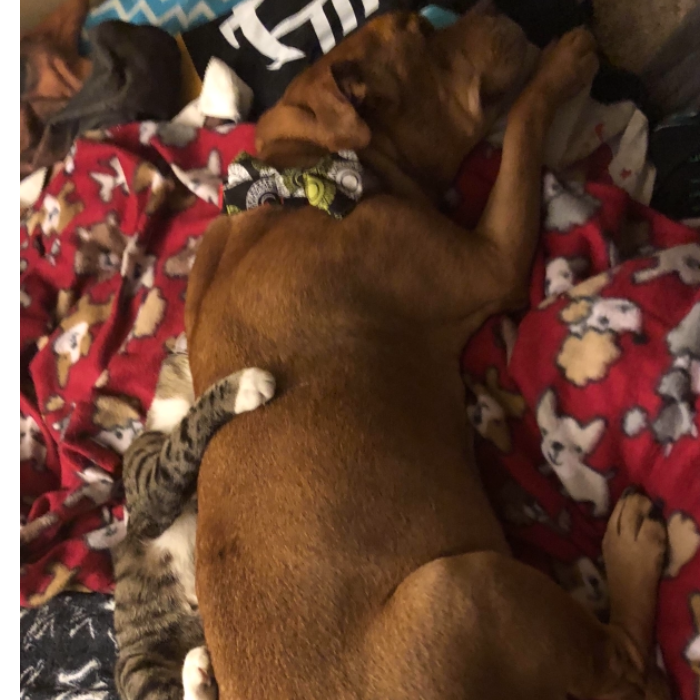 Two months later, we were asked if we would foster an elderly dog named Leo. Although we have taken in hospice pups in the past, when we agreed to bring Leo home, we did not know about the cantaloupe-sized tumor occupying his abdomen pressing into his spine and vital organs. Leo has his own amazing story. But this pup we thought we would have for several years, appeared that we would only be able to give him a few days of loving, and our name, before saying goodbye. He wouldn’t eat, and could barely walk. But then Leo met Stitch. Leo would eat if Stitch ate with him. Stitch would tuck himself in as tight as he could to Leo’s side and groom him, and knead his muscles with his paws. And Leo got his second wind. He found his feet, was able to go on walks, and he ate. But most of all he and Stitch loved each other, this old Sharpei-Staffy and our 8 month old kitten, until he passed away a month later.

So although, I could say so many things about this little cat, and show you pictures of his silly antics or handsome face, I’m sharing a picture that shows his heart. This is him holding, Leo. He had his back. Never underestimate the power of a little Stitch to patch you up when you feel broken.” 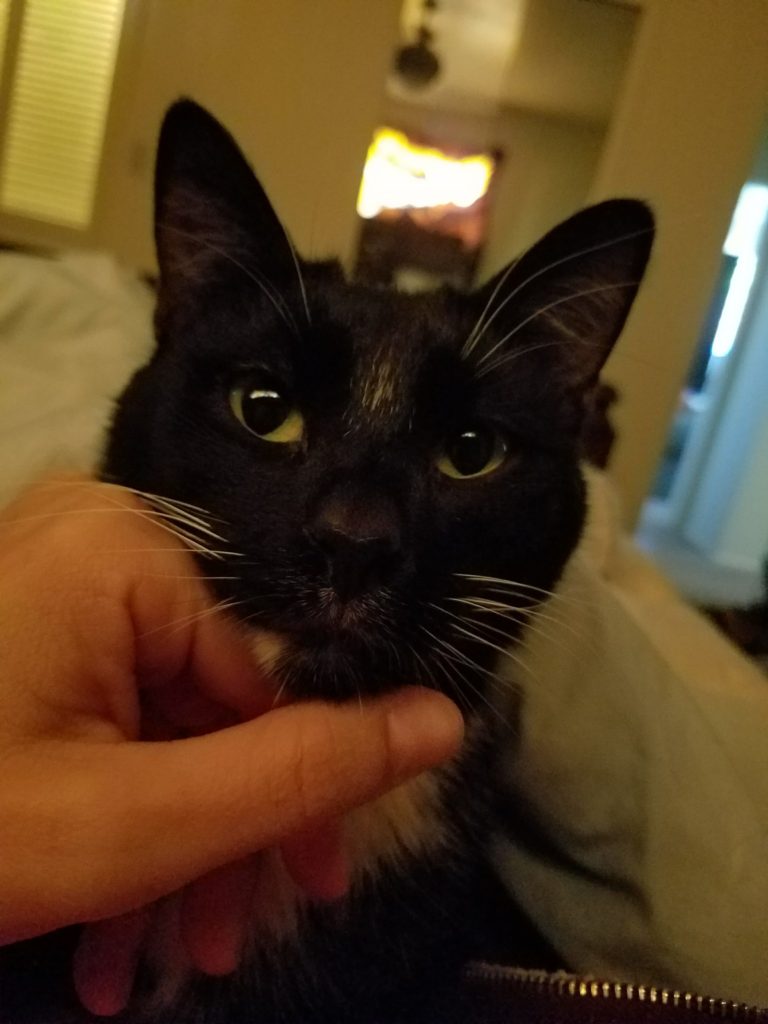 “Loki chose us, and we are so lucky that she did. Within the first year of being a part of my family, Loki saved my sister’s life. One night, Loki woke me up and refused to let me be, which isn’t like her, so I followed her. She kept meowing and yowling until we got to the bathroom door. I peaked in and found my sister on the floor. She is Type 1 diabetic, and was suffering with severely high blood sugar. We called the ambulance and the doctors told us 2 more hours and the outcome would have been completely different. Thanks to Miss Loki’s intuition and persistence, my sister is still here today.” 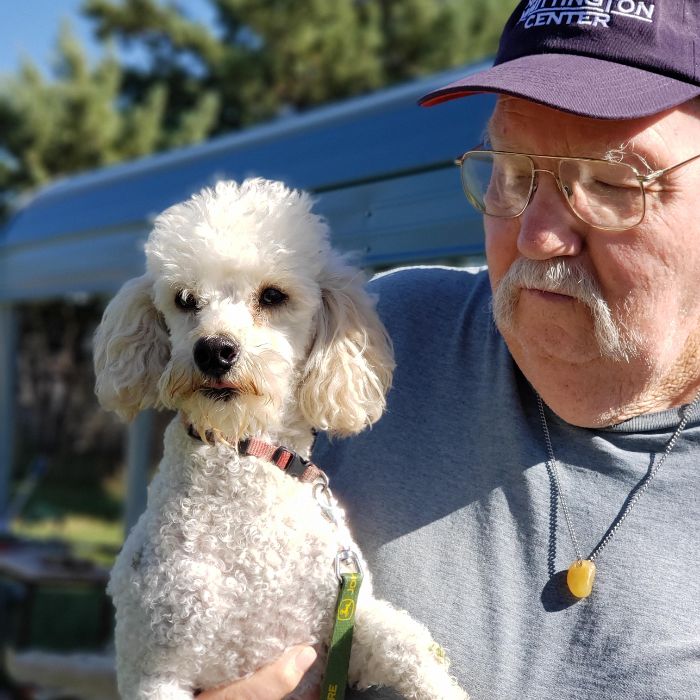 “My wife died in 2018, and my beloved dog, Buddy, a few months later. I was really waiting to die, alone in my trailer house. Then one of my neighbors told me they thought of me when they saw this little guy- also named Buddy. He was at the no-kill shelter. I told them I won’t outlive another dog. My neighbor said AnimalVillageNM takes their pets back if something happens, anything at all. I went to meet him at the shelter and I fell in love with him. The shelter had already trained him. I was going to change his name but since he IS my buddy, I didn’t. I’ve had some health problems recently, but I don’t have to worry about what will happen to Buddy if I go first- the shelter will find him another great home. So I can love him, and never worry about him. I brought him to the free shelter adopter K9 class also, and we passed easily. We go on walks every day and because of Buddy, I’m not waiting to die anymore… I’m enjoying living again. Ronald, 83 years cranky, and woke up again today, with my Buddy!”

Prizes sponsored by Naturally Fresh, Miramar Kitchen and Bath and Save This Life.