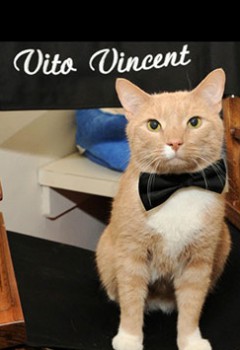 See what Vito Vincent is up to:

“As a former shelter cat, I can tell you that although I loved my caretakers there, nothing is better than having a loving home, guardian, and couch! On Remember Me Thursday®, please remember all the pets waiting to be discovered. Adopt some love home today!”

Vito Vincent wasn’t always loved. He was surrendered by his family and found himself awaiting adoption at Bideawee in NYC. Since his adoption though, Vito Vincent has become a real star, appearing on Thirty Rock, Colbert Nation, and starring on Broadway in Breakfast at Tiffany’s with Emilia Clarke from Game of Thrones. Vito Vincent is fully trained, and his calm personality allows him to work with even the highest intensity productions and individuals. Most recently he performed on the Tonight Show starring Jimmy Fallon as Purrnie Sanders and on the Late Show with Stephen Colbert as Tuxedo Cat.  And Vito Vincent appeared in a short movie called “Happy Birthday Marsha!” which was released in 2018.

“In memory of Michael, the loving guardian of Vito Vincent and a dedicated animal advocate. Michael was an integral part of the very first Remember Me Thursday® event held at Bideawee in NYC in 2013. All of us at Helen Woodward Animal Center miss him greatly.”